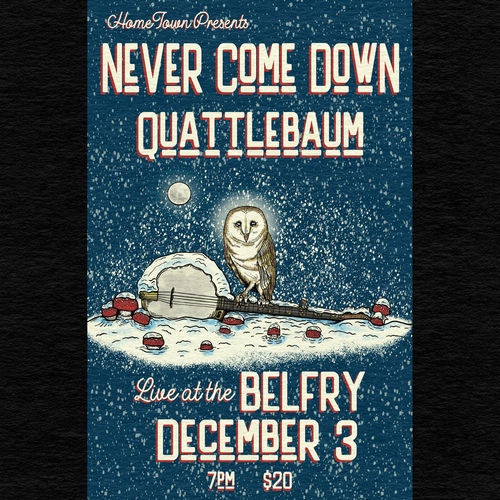 Weaving together modern and traditional styles of bluegrass and americana, Never Come Down is a Portland, Oregon based 5-piece composed of Joe Suskind (guitar), Crystal Lariza (vocals), Brian Alley (banjo), Kaden Hurst (mandolin), and Ben Ticknor (bass). Their dedication to thoughtful songwriting and dynamic arrangements highlight polished technical skills and a commitment to listening to each other. Formed in 2018, the band’s self-titled debut arrived shortly thereafter, and their second album “Better Late Than Never” was released in 2021. They’ve toured internationally and have found acclaim from festivals and venues such as Iceland Airwaves, John Hartford Memorial Fest, Americanafest, FreshGrass and RockyGrass.

Quattlebaum, Southern Gent and Banjo Slinger, brings more to the table than just music. With his infectious smile and weird antics, he brings people together; encouraging camaraderie and building community. The singer-songwriter, currently based in Bend, Oregon, tours the country picking and strumming indie-folk songs that are spacious and emotive, and have an implicit groove. When he plays, you can hear the reverberations of the rustic mountains clashing with the breezy ocean. Like a willowy heron, Quattlebaum struts around on stage as the music moves through him, evoking a range of emotions from laughter to longing. He shares tender moments, where one can almost hear his banjo breathing, then erupts into raucous peaks of unbridled energy—his captivating solo performances take his audiences on a ride.