Storming the Capitol: A Comedy Roast of America

Storming the Capitol: A Comedy Roast of America 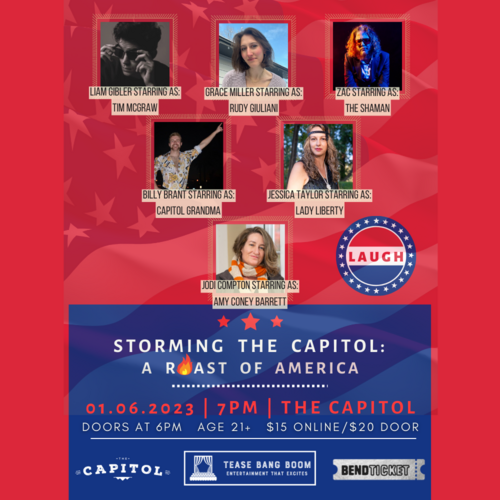 Presented by Tease Bang Boom Productions, this comedy roast is for everyone, no matter your political stance. Let's all laugh at the absurdity we've experienced in the U.S. of A!

Jessica Taylor began her comedy career on a dare several years ago. Upon discovering the therapeutic and healing properties of stand up comedy after leaving a cult, she was instantly hooked and kept needing that fix. As the owner of Tease Bang Boom Productions, she can't wait to bring more elevated comedy shows to Central Oregon

Liam Gibler started writing stand-up as a freshman in high school. After losing a talent show to a guy playing a flute with his nose, Liam learned the value of full commitment to a performance and the pain of rigged elections

Grace Miller is a comedian originally from Boston, where she performed both Stand Up and Improv at Improv Asylum. You can find here performing here in Bend at a variety of shows including Silver Moon Brewing and Craft Kitchen and Brewing

Zac is the Host you want to have for your dinner party! In the comedy game for a little over a year, Zac has been exploding all over Central Oregon. If they are not telling tales of their dating misfortunes, you can find them hosting events for all over town. They last hosted an event for The Bend Burlesque Co & Comedian Dave Hill

Billy Brant was born and raised in Central Oregon and been told his whole life that he’s a joke, well look who’s laughing now… nobody!   Wait… he meant, everybody!  Yeah!

Jodi Compton initially wanted just to be a comedy writer, but quickly learned that nobody on the Bend circuit can afford to pay for material. Inspired by classic screwball comedians like Steve Martin, Bob Newhart and Lily Tomlin, Jodi works in an absurdist vein, while mixing in some current-events material (and, yes, the occasional ‘blue’ joke. Don’t load the kids into the minivan). Off the mic, Jodi is the author of five crime novels, none of which are the least bit funny